Why Relying on an Advertising Business Model Dooms Journalism

IF A MEDIA GROUP HAS TO RELY ON ADVERTISERS TO SURVIVE, THEN QUALITY JOURNALISM DOESN’T REALLY STAND A CHANCE.

That is a bold claim.  I say it only after decades of experience working in the television news media.

Let me try to help you learn this fact more quickly.

Here in America, every business survives or falls based on how much money it generates.  If your money generating system is dependent on other businesses being willing to pay you money to promote them, guess what?  They do not like it when you point out their flaws.

Any news stories or analysis that does anything less than glowingly promote the advertiser is simply going to be off limits.   How far does that go?  Is the entire industry off limits for stories?  Friends?  Family?  How many stories does a media outlet forego once they are beholden to  advertisers?

That much has seemed obvious to many, hence the practices of outlets like the Consumer’s Union, who became legendary for providing critical reviews for products like dishwashers while shunning the ad dollars and making money using other business models, like donations and subscription fees.

Another example I can give from personal experience on why capitalism and journalism don’t mix is a bit like the fairy tale Rip Van Winkle, except I did not fall asleep for 100 years.  I left for about 7 years to be a mom.

It was enough time for satellites and the PR business to radically change the tv news business.  Let me explain in detail.

BACK WHEN TV NEWS DID IT RIGHT

When I first got to WSMV-TV in 1982 as a photographer/editor in the documentary unit, the station was an oasis of quality journalism. WSMV had its own Watergate-like scandal with the reporting of Carol Marin exposing shenanigans by Governor Ray Blanton, who ended up in the federal prison for selling pardons and liquor licenses.

THEY EVEN EXPOSED DIRT ON A BIG ADVERTISER

WSMV-TV had such a huge commitment to quality journalism that management actually supported producing a one-hour documentary exposing one of their biggest advertisers, a meat packer. The meat packer had sponsored many documentaries at WSMV, but that all ended when the station was bold enough to expose the meat packer as having failed numerous routine government safety inspections. To put it very bluntly, there was sh** dripping from the ceiling onto the meat.

The news department wanted the audience to know this sickening fact. The sales department didn’t because they knew the meat packer would be furious and cancel their advertising. The meat company had been one of the station’s biggest and best advertisers for decades. There was much arguing and turmoil behind the scenes, but in the end, news won out. The documentary ran. The meat packer canceled their advertising.  The news department won awards and brought in huge ratings.  The picture below was published in the newspaper after the station won the coveted Edward R. Murrow award sponsored by the Radio and Television News Director’s Association.  (RTNDA) 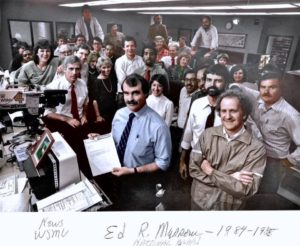 Unfortunately for Nashville and the rest of the world, WSMV-TV changed ownership several times after establishing itself as one of the best television newsrooms in the country. It started out with LOCAL ownership, which is ideal.  With each ownership change, the quality and commitment to news deteriorated. Then deteriorated some more.

It got so bad, that by the late 90’s the station management insisted on mostly doing fluff and superficial garbage. This depressing reality hit me smack in the face when I was excitedly pursuing a worse-than-Watergate-like scandal perpetrated by some local officials.  Had the story proven true and aired, more than one prominent political figure would have wound up in prison.  This was a HUGE story with tons of credibility.

I kept going to the news director with each tidbit I dug up, but he kept blowing me off, saying things like, “Well, great, but not today we have to cover the airline crash.”   In hindsight, I think he was hoping I would figure out that the top management simply would not agree to cover such a story.  Stubborn me kept pushing.  Finally, he got fed up and screamed in my face, “Stop pushing this story and just do the superficial bullshit we ask of you!” Seriously, that is a verbatim, direct quote from the news director of WSMV-TV.

He knew the  upper management better than I did.  I am reasonably positive that if the decision had been his alone, we would have covered  this story.  He was a good  journalist, but understandably did not want to lose his job.  What the owners want rules the day.  He was just as powerless as me in this situation, which really sucked but that was reality.

Upper management simply did not care that I had already dug up lots of solid evidence, including a photocopy of an illegal $500,000 campaign contribution. I also had an interview with a rape victim where the crime had been covered up for the sake of political expediency.

There was lots more dirt, but the station wasn’t having any of it, so the scandal died on the vine. Large scale government corruption went completely unchecked.  Management was not about to call out the local bigwigs for massive corruption.  No way.  I was a fool to think they would.  That TV newsroom was history.

This was the new WSMV-TV news.  A pitiful shadow of what it had once been, scared away from doing its Constitutionally mandated role of government watchdog and informer of the citizens.

TIRED OF FIGHTING IT
Tired of the superficial garbage and sensationalistic PR passing as news, I finally got out of the TV news business and taught video production in a high school.

After teaching, I went online as an independent entrepreneur. Enthralled with the incredible opportunities presented by online video, I built this site to teach others the art and science of video production and push for quality journalism.

TIME TO DO SOMETHING!

Always a political junkie at heart, I firmly believe that poor quality TV News, with its disregard for real journalism, is one of the biggest problems we face, since an informed citizenry is essential for a functioning democracy. Through no real fault of their own, the citizens are grossly misinformed on every subject from healthcare to the deficit.  This sad truth is destroying our county.  I’ve been saying this for years now but today it is so obvious, I am hoping  more people will join me and DEMAND REAL JOURNALISM.

Thank you for reading.