Demand Real Journalism: Why I Embrace “Dare to be Dull” as a TV News Slogan

Real journalism can be very boring.

Sensationalized gossip on the other hand is quite entertaining!

Human nature being what it is, many people actually prefer the latter, even if they don’t even realize it on a conscious level.  (Or want to admit it.)

Documentaries and hard hitting news shows are notorious losers in the ratings.  Few people  have any desire to watch documentaries.  Some do of course, and shows like the long-running 60 Minutes on CBS are clear exceptions to this generalized rule, but when you look at the overall big picture, it’s clear that “real journalism” is not the best audience grabber. Never has been and never will be.

People prefer to be entertained.  Real news is not only boring, it can be quite depressing.

If you read articles on reducing stress, they often suggest not watching the news due to its depressing nature.    I certainly can understand that, but ignoring problems does not make them go away.  Most people would counter that by saying they have no control over stuff that happens in the news so why should they depress themselves with it?  I truly understand that.  I often feel the same way.  Problem is, when the majority of the country takes that position, then the  news media descends into the abysmal state we see today.

There are lots of reasons why TV News, and the news media in general,  is so dysfunctional.   Most of the reasons have to do with the media outlets themselves but the audience is partly to blame too because not enough people demand real journalism!

Most news outlets feel obligated to please their audience.  If they don’t, they can’t sell ads and stay in business.

The audience is considered to be “customers.”   What business does not want to please its customers?

It’s really no wonder that celebrity gossip, sensational crime stories and superficial tripe tend to dominate what we call news in this country.  Lots of people love watching that stuff, but would be bored silly with an in-depth documentary on detailed fiscal policy.  Boring is in the eyes of the beholder, but for the most part, sensational – or FUN – wins every time.

Real journalism would probably thrive better in a non-profit environment, but where, in a capitalist society, can you find that?  PBS and NPR are non-profits and most observers do indeed feel like their journalistic standards are typically quite high, or at least higher than the commercial outlets.  Of course, NPR and PBS are political pawns and struggle just to continue existing. 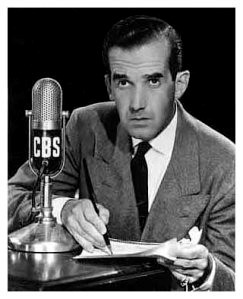 Back in the early, golden days of TV News, networks, CBS in particular, were willing to lose money on news shows.  They considered it akin to a “loss leader” in retail.  Producing quality news helped them achieve critical acclaim and respect.  That positive reputation  rubbed off on the network as a whole.  Their entertainment divisions benefit by association with their news division.  Profitable entertainment divisions made up for their unprofitable news.

Over the years, that philosophy faded away.  Profit-making became the goal, as it is in most businesses.   If you can not make a profit, you can not stay in business.  I get it.

TV News shows use a business model of selling advertising.  The more viewers they have, the more their advertising is worth.  So naturally, the news shows pander to the audience’s desire for “entertaining” news in order to attract viewers.

I find it hard to criticize people who do not like watching hard news, but I do find it an overall distressing reality.  I myself love a good documentary but I also love a gripping true crime show.  I love game shows, I am not being judgmental against “fun” tv, but the overall trend is concerning when you look at the big picture.

When celebrity gossip and superficial fun stuff passes as news, we all lose in the end.  Fun is great, but in the long run, it’s meaningless compared to the boring economic policy information that shapes our very lives.  Maybe I should say: “A country is not run on fun tv alone.”  NEWS needs to be NEWS and entertainment needs to be entertainment.

Whether one likes it or not, real journalism is important to maintaining a functioning democracy.  Voters can’t  make informed decisions if they do not have the facts on important issues.  Our country suffers when we allow celebrity gossip and other “infotainment” to dominate the news.

Thanks for reading Demand Real Journalism!

dare to be dull, demand real journalism, why is tv news so bad